As part of ‘Azadi Ka Amrit Mahotsav’, an initiative of the Government of India to celebrate and commemorate 75 years of Indian independence and the glorious history of its people, culture and achievements. Kalakshetra Foundation is presenting ‘Amritam Gamaya’ – The International Festival of Performing Arts, that will bring alive Indian culture and instill pride in our rich heritage. This festival will celebrate the Immortal, Invincible and Intangible Heritage of Bharat.

‘AMRITAM GAMAYA’ proclaims association with the past, connecting through art and delving deep into the roots of the rich heritage of India so that succeeding generations can explore, expand and contribute to the cultural and creative economy of our Nation. It will recreate awareness of the connection between the varied forms of dance and music, both classical and folk, prevalent through the length and breadth of India and trace the parallels between certain Indian and International art forms through curated presentations in various venues across the country. Amritam Gamaya echoes the spirit of Azadi Ka Amrit Mahotsav by creating a movement that connects the different parts of India, spreads awareness among the youth, and cherishes Indian culture and traditional art forms.

This festival is scheduled to be conducted in 3 cities in India – Ahmedabad on 29th July 2022, Bengaluru on 6th August 2022 and Dehradun on 9th August 2022 and will include a variety of programs in each city. The event will include interactive performance by the artistes for school students. Diverse forms of traditional Indian music and dance – classical, folk, semi-classical and tribal – and innovative art amalgamations with International art forms will be presented by eminent artists and curated on one single platform. 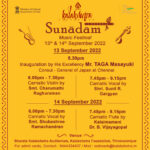